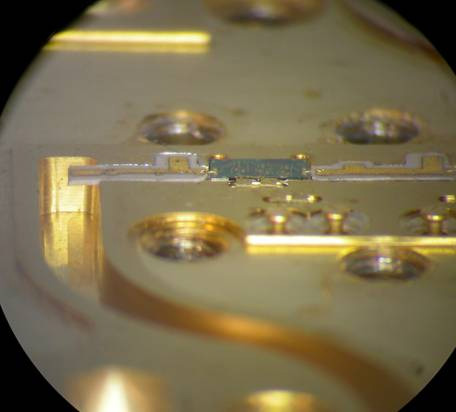 The in-gathering of requests has ended. Thanks for all who have participated. Now the building starts! I will post progress on this site. 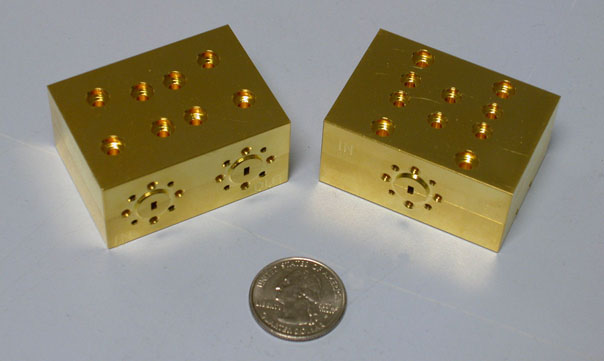 Recently I got an inquiry about the dimension to help with defining waveguide lengths for integration of the through-style body. Here is my answer.

The LNA block is dimensioned at 1.480 inches from WG boss to WG boss. There is plating of approximately .001 inches (which adds to both [all]surfaces), bringing that dimensioned (design) number up to 1.482. I have measured several plated bodies, and with a caliper that measures in .0005 inch increments, and made the following measurements:
1.4810, 1.4815 ,1.4830, 1.4820, 1.4820
I think its a safe bet to use 1.482 as the correct distance from boss to boss. This is the dimension you will need in order to design the Waveguide pieces. Waveguide is always specified to the mating surface (front of the boss)and centerline.

Below is a photo showing the development with three versions.

Of the most recent units constructed, all have achieved a noise figure below 4 dB, in fact all were below 3.5 dB at 78.192 GHz using equipment which although not calibrated to NIST standards appear to be reporting correct results. Check back here for any further information about performance measurements.
In October 2012, finally obtained a newly calibrated source and its results were checked against a liquid nitrogen hot/cold with agreement. The ranges given in the table below show the original measurement (lower NF number) and the more recent one which are about 1 dB higher.

The units constructed so far achieve between 27 and 30 dB gain at 78.192 GHz, as shown in the graphs below.

I had originally hoped to be ready to build around early in 2011, but family matters and technical problems have delayed the project.

August 29 2012 - Have measured one test LNA and a known mixer with filter by two systems and achieved nearly identical results. Now I am convinced that we have a design that achieves noise figures well below 5 dB (between about 3.8 and 4.6 dB at 78 GHz) with high 20's dB of gain.


Thanks for your continued patience.